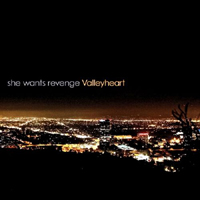 I’ve talked about She Wants Revenge before, confident the group would be delivering the goods for a while. Even though Valleyheart is a departure from their usual body of work it does not let my expectations down. The sound is more upbeat in an 80s inspired way, sort of like a happy Depeche Mode. Justin Warfield is definitely going for more range to loosen up the duo’s style, and while some tracks are slightly unexpected upon first listen, this is an evolution that works.

The tracks are overall more dancey, almost a bit poppy. It may initially seem unfortunate to associate She Wants Revenge with ‘safe’ but a lot of acts flirt with the mainstream without damaging their integrity. It pains me to say it but these days pop is less about pandering and more about restyling anyway (think less Rebecca Black and more Linkin Park).

Perhaps it paints the wrong picture to be mentioning all this in the context of this album, which admittedly does end up being the worst of the lot merely due to the fact that the band’s previous work has been nearly flawless. But Valleyheart can stand alone as a great album and will certainly find itself the favorite among some fans. More range than the first album and more variety than the second- there’s a lot to like in this collection. The driving beats and monotonal riffs that define the band are back in full effect. A sense of cool oozes off the tracks and despite the pop tinges this is definitely not top 40 music. She Wants Revenge has cemented their niche perfectly and show no signs of slowing down any time soon.