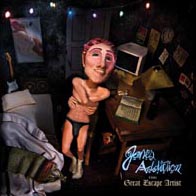 Bucking my trend of reviewing albums much too long after they’re released, I am determined to get word out of the new Jane’s Addiction album quickly. This is mostly due to the large amount of harsh criticism The Great Escape Artist is getting. Some call it pandering, some call it unnecessary- whatever it is, it’s rubbing people the wrong way. Whereas their last album, Strays, attempted and succeeded at rehashing ‘that same old Jane’s sound’, this effort has different ambitions entirely.

After an 8 year hiatus The Great Escape Artist is yet another comeback album of sorts and this is most definitely a different Jane’s for a different age. A more electronic sound with a dash of Brit-Pop production sounds like an awful idea at face value but what ultimately matters is the talent and chemistry of old meeting new. This is a case that produces smooth and techie beats along with a softer vocal effort. Dave Navarro admits that his new guitar style is more melodic and simplistic. The end result is what the band wants, a listenable record with a lot of layers.

Let’s talk about the elephant in the room. Did Jane’s Addiction sell out by changing their style and going more modern? Is this unoriginal poppy pandering? A resounding No. An honest listen to Irresistible Force makes this quite clear. There is a lot of purpose and emotion in this song and if a brand new band came out today with this track I think it would get plenty of attention. I am not a single-driven fan, however, but I rest easy listening to the rest of the album. The songs are catchy, smooth, and Perry Farrel’s voice sounds well in place. True fans of this band should find enough familiar here to like.