Don’t get me wrong – this is a pretty good game. Its American fantasy animation style makes for some beautiful visuals and a unique setting, which should be noted involved neither a prince nor Persia. The animation and running on walls and climbing, while not inspired, is solid traversal stuff. There’s also a couple cool pieces of tech that the developers experimented with- cloth tech for the character’s clothes and blobby tech that reaches out to the player as he walks by. 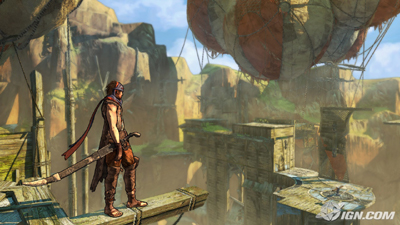 Ubisoft Montreal, the developers, put a lot of good into Prince of Persia. They, however, broke the golden rule of game design: A game is not the summation of its parts. They tried to cram everything in and hope it came together without a care for what the final experience was like. Ubisoft has been guilty of this before (see Assassin’s Creed aka. why I didn’t buy Assassin’s Creed 2) and doesn’t understand that making a player repetitively perform the same tasks is not fun.

These are both very traditional game mechanics that we are all familiar with. The problem I have with these two parts is that the developers make you go through every level once for the first thing, then populate the level with collectables and make you traverse the very same level again before you can move on.

Mind you, collecting games can be fun. Mario and Sonic had a healthy amount of collecting *mixed in* with the combat. But separating them out to be done at two distinct times over the same level? This is just lazy design. It is basically doubling the length of the game by making you play it twice.

Imagine a level that is a tower. I climb the tower and kill a couple guys on the way up. At the top, I kill the boss. Then the land is healed and magical light seeds appear everywhere. I go down the tower (a different and faster way than I came up) and collect seeds on the way. Now, at the bottom, I can move on to another level, or I can go BACK UP the tower again to collect the seeds on the way up. So now I repeat the initial level again just so I can obtain a reasonable amount of light seeds. Now I am at the top again with nothing to do there, needing to go back down. I go down, again the way I went down before, without even any seeds to collect this time around. Well, that was a lot more work than i wanted to do. And the most annoying part is that Elika, your sidekick, keeps urging you to hurry up to the temple or something even though the game wants you to go on an Easter egg hunt.

Making the game longer by stuffing filler in doesn’t only make the game less fun, but it means you’ll be playing a less fun experience *longer*. That, sir, is not the way to entertain. You cut the fat, let the players play the good parts, and have them finish the game wanting more. That’s how you sell sequels. And expansion packs, apparently, since you can purchase a few download-only levels from the PlayStation Store.

With the underlying fundamental flaw of Prince of Persia out of the way, there are still other problems. The combat system in the game attempted to be intuitive by assigning a button to ‘magic’, ‘throw’, etc. but in practice came across as a Dragon’s Lair button reaction game. There is a complicated combo list of what buttons can be hit at certain times that I only started to get the hang of at the end of the game. And by that I mean I used the one combo I knew over and over. 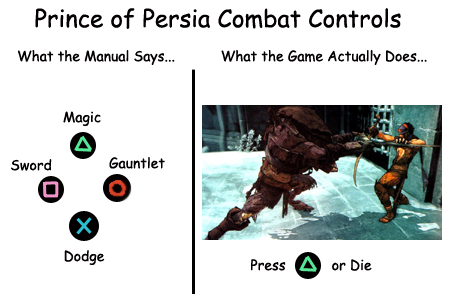 All the animated attacks look very cool in combat but the experience didn’t end up as freeform as what I think the developers initially envisioned. Every fight takes place on a raised platform and you can instant kill guys by knocking them over the edge. Imagine my surprise when I fight a boss, and after a cut scene where he says how bad ass he is, I position my attack correctly and knock him off the edge in one hit. It took me about 1/3rd of the way through the game before I found an enemy who wasn’t this easy to kill, and I was thrilled for the challenge.

The theme of the bosses, on the other hand, is very cool. There are some obvious Shadow of the Colossus influences at work here. Most of the game is level traversal and boss fighting, with very few generic fights in between. You almost feel sorry for the bosses when they are killed. Even the concept of using a dark god to bring a girl back to life, at the sake of the land, is copied. But Prince of Persia fails to match the elegance of Shadow on almost all fronts.

You can choose your own path in this game, and I honestly don’t see the strength in that. If there are 4 levels per boss and I can beat them in any order, then there is no feel of progression. Instead of feeling like you are slowly defeating a boss, you simply fight it in 4 identical battles with the same generic evil dialog beforehand. Linearity could have been a strength to this title and allowed the story to be presented much better.

Instead, we are treated to stilted and disconnected dialog. And might I add, horrible dialog at that. The two characters squabble back and forth without making a semblance of a point. Oftentimes when one of them mentions something important the bickering takes over and the subject matter is lost. Sometimes you are treated to lengthy explanations of mundane things to flesh out the world, and other times you have to sit through bad jokes. The game doesn’t even take itself seriously- one time you are fighting a boss and you keep pushing him into a wall to defeat him, and the hero says, “I hope he keeps falling for this.” This breaking down of the fourth wall with chatter became more of an annoyance than anything else. What’s worse, the two main characters follow the hollywood romance model of fighting until they are attracted to each other. So when it comes time for me to save Elika from death, well, I don’t really want to- she likes to argue too much. 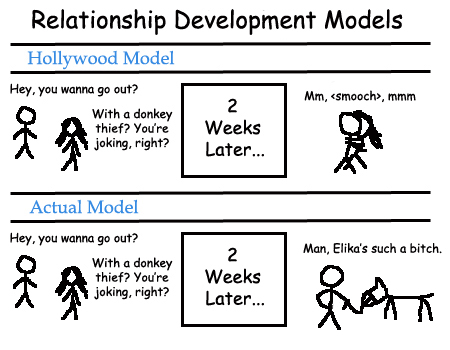 In the end, it sounds like I am being much harder on Prince of Persia than I should be. I almost stopped playing it because of its faults, but about 40% through the bosses get more challenging and the necessity for light seed collection goes down. I actually trudged through and beat it, which is more than I can say for a lot of video games these days. It was fun, but it could have been outstanding. Using Shadow of the Colussus as a roadmap was not a bad decision but Ubisoft didn’t have the heart to see that through.