Mixed Martial Arts has really been catching on over the last 5 years and I admit I’ve been enjoying the ride. It is fresher and more violent than boxing and its other brethren while still remaining very technical. The wider array of skills required of fighters provides comparatively vastly different fighting styles and ways for any given bout to turn out.

Unfortunately, MMA is in a very real danger of turning stale. It is ironic that a sport notorious for being brazen is comfortably settling into boring. While it is impossible to overcome the adage ‘what was once new is now old’, I am alarmed at how fast MMA fighting is losing its edge.

For the record, I am not going to start a diatribe about the good ol days of ultimate fighting where anything was allowed and sumo wrestlers fought ninjas. It was a great gimmick, and a bloody good time- literally- but it simply wasn’t sustainable. To garner real credibility and attract long term athletes many safety issues needed to be addressed. MMA had to go legit if it had any hope of surviving.

I’ve complained at length before about sports that involve judges handing down decisions. After 3 rounds of battle the last thing viewers want to be left with is a scorecard determining the better fighter. Split decisions are even more horrible because it means that two people whose job it is to grade the fight thought that different people won! But it is begrudgingly hard to not have some sort of tie breaker in a sport like this (though I’d be open to experimentation). And letting the fight go on forever isn’t a solution because nothing is worse than watching two gassed fighters hugging each other and gasping for air.

So why not look into solutions that avoid stalemates? The takedown is arguably the biggest tactic that separates this sport from boxing and without a doubt injects a sense of excitement into an otherwise stand up affair. A large part of the ‘Mixed’ in Mixed Martial Arts is due to the fact that every fighter needs a ground style to complement his stand up style. Gone are the days when you can simply be a good puncher and get far- Kimbo Slice can attest to that. What this means is a well rounded fighter is a better fighter and there is bound to be good variety in the fight. Going to the ground is good for the game, no doubt, yet takedowns are still proving to be the weak link of Mixed Martial Arts.

Give the weapons back
There are a lot of illegal strikes in the UFC. Many of these are holdovers from when the sport was trying to claim its legitimacy. But now that MMA commands a lot of money and viewership its backers can flex their muscles and allow some of these strikes again. I don’t think anyone is asking to see more knees to the heads of downed opponents but if a fighter is on his back and being attacked from above, he shouldn’t have to worry about whether his attacker has a knee down on the mat or not. He should be allowed to strike away like crazy and open up the fight. Let’s make it potentially more painful to simply lean on top of a guy and kill clock.

Remove the defender’s edge
In the earlier days of MMA takedowns were more exciting mainly because dominant styles weren’t formed yet and it was harder to defend yourself on the ground. It was much more common to see arm bars and other submissions because the opponent often didn’t know what to expect. The classic ground and pound was easier to apply because an opponent didn’t properly counter a full guard position advance. These days everybody and their little brother attends MMA gyms and learns takedown defenses and the whole thing degenerates into two guys on the floor trying to control the others’ hands. It is common for neither fighter to get a strong edge for long periods of time because they are both trained to use the same tactics. Everybody knows that wrestling is gay and you wouldn’t ever find it being relevant except perhaps in an Olympics discussion, yet this is what we end up watching for large portions of UFC matches. The only other real ground style is jiu-jitsu, which sounds a lot cooler but actually turns out to be even more homosexual than wrestling. 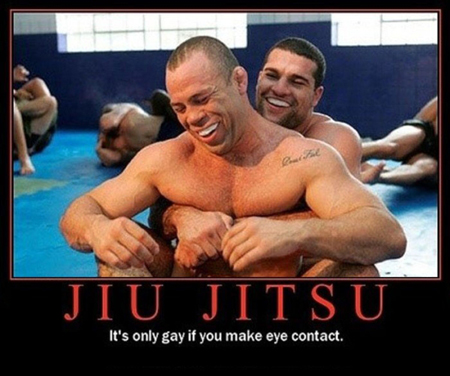 So why is it that these strategies are still allowed? Fighters are ultimately just gaming the rules- give them new rules to make things more exciting. The forward pass did wonders for football, after all.

Is change easy? No. Are the solutions obvious? Of course not. But the problems *are* clear, and it only takes a bit of foresight to address them. Don’t reward lazy fighting. UFC is only 3 rounds because the action is supposed to be intense. Don’t allow fighters to sit in stalemate positions to catch their breath. If a fighter is not being dominated then he should have tools to fight back. Coaches often tell their fighters not to leave the outcome in the hands of the judges. The reality is, as long as the UFC ruleset doesn’t promote this mentality, you can’t expect the fighters to do anything different.