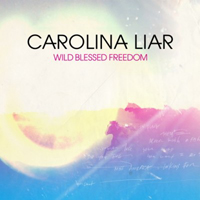 Carolina Liar is one of those bands that falls into the weird category of ‘you listen to them but you don’t necessarily want other people to know that you like them’ (otherwise known as the Coldplay Conundrum). They are talented and have some contagious songs but it’s hard to defend them as vehemently as other indies. Still, their music, while a bit standard, remains good to listen to. Their first album, Coming To Terms, has some really exceptional songs but my first impression was that it was too sterile. However, it grew on me pretty quickly. The melodies are catchy and surprisingly moving in their simplicity.

As with their first effort, Wild Blessed Freedom sounds pretty bland on a first listen. The songs mostly have a very similar sound but perhaps with less character. There’s nothing innovative here or different except for one song that is heavy on a synth drum beat.

It’s hard to get upset about a bunch of happy, 3 minute songs. There’s not a whole lot of variety on this album- you can even notice them using the same song structures across this collection, but again, my brain likes the friendly noise that is coming in. It doesn’t hurt that the singer’s voice is great, crisp, melodic, and brings range from moment to moment.

There’s just a noticeable void of 5 star songs that can change the makeup and emotional resonance of the album. Without them you get the feeling that all you are listening to is filler. What’s worse, a couple of the tracks have hi-energy beats that border on j-pop and threaten to bring the impression of the entire experience crashing down. What results is a compilation that feels wanting. As a fan, I am sure Carolina Liar could do better.

In the end, if you like the first album a lot, then you’ll at least like this one a little. It’s more of the same and probably not as well executed which admittedly isn’t the best case for a sophomore album. I have doubts about the sustainability of the future of this band now but those questions will just need to wait a couple of years for definite answers.