This movie was horrible and I’ll tell you why. There are some serious spoilers coming up so if you haven’t watched the movie you shouldn’t be reading this.

2 hours and 50 minutes is too long for this garbage. The length alone isn’t what I object to but somebody somewhere should’ve realized this movie wasn’t good enough to justify it.

The dialog was extremely bad. How many, “I guess the comedian didn’t have the last laugh,” jokes am I supposed to sit through?

The whole thing felt so juvenile. These were cheesy super-heroes with cheesy quirks. The author’s idea of a bad childhood is the mother screaming, “I wish I had an abortion!” to her son. It’s obvious the comic books were written with a 13 year old audience in mind. Dr. Manhattan came off as the product of an art student who just learned how to draw the human form and so kept drawing naked men. 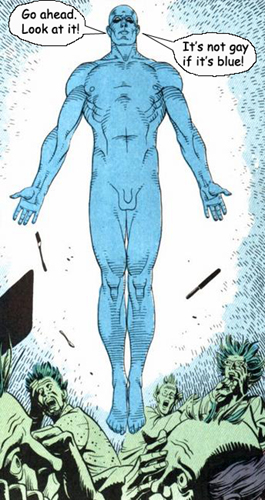 Wow, talk about timeline hackjobs. Dr. Manhattan and Silk Spectre go to Mars to have a conversation. In that time, Rorschach and Nite Owl sneak into the bad guy’s office, hack his computer to uncover the plot, get on their ship and fly to Antarctica, infiltrate the fortified base, and confront the enemy. Then Dr. Manhattan and Silk Spectre finish their conversation. What? They’re not seriously going to montage a 5 minute conversation over all those other events and have me not notice it.

Do audiences not realize when this “movie time” phenomena occurs or do they just not care? Seconds after a nuclear bomb goes off, scientists have already determined the apparent cause of the explosions? That would take weeks! Think I’m nitpicking? Well, then exactly 4 minutes later, Russia and the US reach a peace agreement and there is already a press conference on tv about it! Does that sit well with everybody too? At what point should we stop swallowing this poorly thought out narrative? 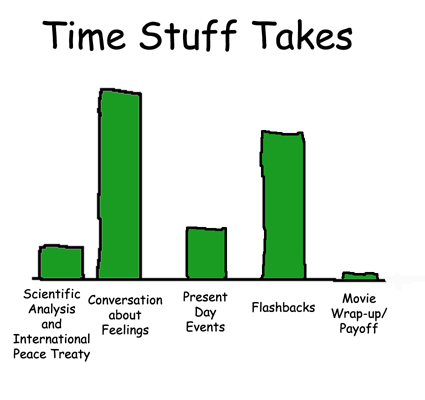 The evil villain is this crazy egyptian soliloquy machine until, at some point, he turns completely normal and rational without any outside factors. If he wasn’t going to fight at the end then why did he even start fighting to begin with? And he wants to create world peace by triggering multiple nuclear explosions? What kind of plan is that? Believe me, when the world is on the brink of nuclear war the last thing you want to do is blow up cities. Nothing will trigger armageddon faster than that.

Now I’m just droning on. But the sum of all of this is that the movie is tragically disappointing. The underlying premise of famous old-school super heroes living mostly normal lives today is original but almost nothing else in the film is. Let’s face it. The graphic novel was written in 1985 and is outdated. The movie adaptation went for complete reverence of the comic books- while that may appease the grown-up readers it isn’t likely to garner new fans.