I just watched George Lucas’ directorial debut film for the first time. It’s from 1970 and is one of the many dystopian future movies that the generation produced. The film has an artsy tinge that you might not expect from George Lucas but it sort of makes sense considering this is a remake of a short student film he made a few years earlier. Still, the scene composition isn’t generally suited for mainstream audiences and might feel a bit tiresome. If you can get past that though I think you’ll find THX 1138 an overall satisfying experience, if a bit superficial and cheesy.

What is cool watching this thing is how many similarities to Star Wars you’ll notice. The police officers are robots that have radioed storm trooper voices. Seeing their stark uniforms walking in long futuristic hallways is also very reminiscent of the marching soldiers. Some of their voices as well as those of the computers have the cool ‘droid filter’ effects layered over them. There’s even a scene where the police are hitting the protagonist with extended shock nightsticks with electric sounds that are clear precursors to light sabers. And of course, the low tech 70s computers are awesome. 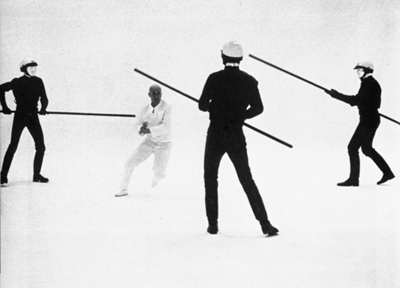 Funny enough, this film shares another similarity to the popular Star Wars trilogy. George Lucas released a director’s cut that has added computer graphics and ‘busy city’ scenes. It was a bit jarring watching a 70s movie and seeing this technology interjected but overall it was tastefully done.

By far the coolest thing I discovered in THX 1138 was when the main character was flipping through tv channels and settled on a police android beating a civilian. It was just a hologram of the man being hit with a nightstick repeatedly but I immediately recognized where the audio had been sampled. Imagine this vicious beating while listening to the intro of Nine Inch Nail’s Mr. Self Destruct and you’ll get the idea.