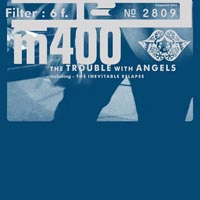 Filter is one of those bands that was easy to love after their first album. I have spoken before about how they will never be the same as the good old days but when they released Anthems For The Damned a few years ago I did kind of get into it. The problem with that album is not that it’s bad but it’s generic. The choruses are powerful and I like to listen to the songs but they all bleed together. If the music was playing at someone else’s house you would bob your head to it but there was a certain lack of character that kept the album from standing out. It also featured some of the worst parts of prior albums, namely annoying screaming that didn’t contribute to the songs, a dead space track that grated the ears, and soft songs without soul meant to cater to the radio listening crowds. But overall, still, Anthems For The Damned showed a glimmer of promise.

Enter The Trouble With Angels, and the promise is fulfilled. All the strongest traits of Filter Nouveau are set to 11 and much of the hindrances are left behind (well, Absentee Father has a couple of eye-rolling screams). The hard songs go HARD without reprieve. Real effort has been put into giving songs individual characteristics that provide identity. The album is cohesive and flows through a few different styles without all sounding derivative of each other. The choruses are even more catchy. There is nothing ground-breaking here at all- it is just solid rock. It’s strange because the album doesn’t immediately impress itself on you but after listening to a couple tracks it is difficult not to succumb to the energy and mood of it all.

Unfortunately, much like the last album, none of the songs truly force themselves to be considered all time favorites individually. Filter is still only a fragment of the band it was since the creative duo broke apart after the first album and it’s unlikely that we’ll see their music ever top the charts again. But if you find yourself willing to accept that change happens, not always for the better, and you listen to The Trouble With Angels with open ears and an open mind, you just may find yourself subconsciously rocking out. In the end, that’s what a solid rock album is supposed to do. And that’s not such a bad thing.