Today is the end of the world.

That sounds like a good first line of a novel, but unfortunately there are those out there who don’t see this idea as fiction. Harold Camping is a batty old man who runs the Family Radio network and he is convinced that today, May 21st 2011, is the day of the Rapture. “Recent events, such as earthquakes in Japan, New Zealand and Haiti, are harbingers of impending doom” he says, and he is spreading that word across his worldwide radio network and very likely messing up a lot of people’s lives.

So what is the deal with Apocalypse predictions anyway?

One of the most common responses you will hear to this question, as Harold states above, is that it is clear that the end times are nigh because of all the death and tragedy that is happening around the world today. The clear and obvious counter to this fallacy is that bad shit has been going down for thousands and thousands of years. Was the Japanese tsunami proof that the world is ending? What about 9/11? Hmm, what about little events you may have heard of called WW1 and WW2? How about the fall of the Roman Empire? Or, say, what about the planetary disaster that wiped out the fucking dinosaurs? There have been many tragedies in history and the only difference between now and then is that we happen to be alive now. This line of thinking is extremely self centered, as if nothing that happened before we were alive is important.

But man do some people take stock in it. And when people believe in something, there’s money to be made. The internet has spawned hilarious real world companies that service the end times.

Youvebeenleftbehind.com is a “Rapture Notification System”. Several good Christians spread around the world collect email messages from people who plan on ascending to Heaven but have loved ones who will inevitably be ‘left behind.’ When a majority of the Christians fail to log in to the servers 3 days in a row, they will assume the Rapture occurred and a mass emailing will go out. I wonder what their website says about today’s prediction?

Oops. Well if this website can’t handle a FAKE rapture, what makes them think they can handle a REAL one?

Then there’s the budding industry of “Post-Rapture Pet Care”. Are you worried about your dog being fed after you go to Heaven? Well, just your luck, there is a network of pet-loving Atheists who will take your yearly insurance premium and make sure to care for your pet in the eventuality of an Apocalypse.

And apparently there is a non-significant amount of religious people spending money on these services.

But let’s get this out of the way. This isn’t about religion versus science. I’ve long advocated that the two are not polar opposites. I myself am Catholic but you don’t find me immersing myself in propaganda and scare tactics. Does that mean that I believe one day there will be an Apocalypse and the world will end? Let me put it this way. 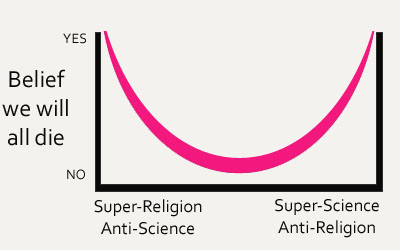 The crux, of course, is the little matter of *when*. But to that I say, who cares? Every single one of us can have our own private Apocalpse at any moment and unexpectedly die, and worrying about it is not going to do us a whole lot of good. Furthermore, and make no mistake about it, it is outright arrogant to predict the Apocalypse and expect anyone to listen.

Which leads us back to Mr. Camping, the man who started this latest freak out.

How does anybody seriously follow this man? I am sorry, but if you predict the end of the world in the absence of overwhelming evidence, you are crazy. And not just a bit crazy, but balls-out batshit crazy. As to how people like this ever get followers, well, as evidenced by the fact that Celine Dion fans will go to their graves believing that she is the greatest person to ever live, crazy sticks to crazy.

“The 2012ers are weird”- I’m with him so far- “The world will end sooner than that.” Ok, he lost me. Where does he get off dismissing someone else’s unfounded pseudo-science for his own? Why is his proof so much more compelling? 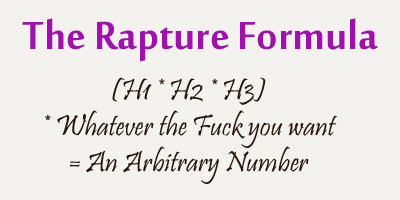 WTF? Where did the 2 come from? 3, if anything, being the number of the Holy Trinity, makes more sense. So why doesn’t Mr. Camping believe that we maybe have another 722 thousand days to live? Because that date doesn’t happen in his lifetime.

The hilarious thing is, he’s done this before. He’s literally predicted the Rapture with a mathematical formula before and (wait for it) was wrong. On September 6, 1994, when nothing happened, he said his math must have been off.

What do you think he’s going to say tomorrow?

So there you go. I’ll see you all tomorrow, whether you believe it or not. I will probably have a hangover at the time, though. If there’s one thing end times predictions are good for, it’s a reason to go out drinking.