Besides having the most awful title I can think of, Superbrothers: Sword & Sworcery EP is a charming iPad game in many ways. It is an anachronistic blend of classic medieval adventure, pixel graphics and modchip music, rock and records. This marriage of strange yet stylistic makes it the current darling of indie iPad games. However, special attention by definition comes with turning a blind eye to certain faults, and who am I if not one to set the record straight?

I am surprised that I have not yet written a post on Video Game “Media” but there is a certain IGN review that blatantly makes my entire case for me. Here’s the formula when reviewing a hit: Find a game that has something interesting or cool about it, talk it up until it can not possibly live up to the written hype, completely disregard its glaring faults, and anoint the title as ‘near-perfect’. 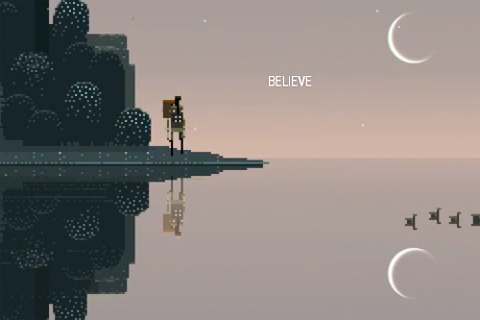 This review in particular emphasizes how Sword & Sworcery is so beautiful and different and points out the clever puzzles and good music. I would agree that the music and art fit well together and serve to create a dreamy atmosphere. The 8 bit pixel art is endearing but it does have its drawbacks – I didn’t know my avatar was a girl until about a third of the way through the game. And as far as the gameplay, there are barely any puzzles at all. If you consider tapping on random places on the screen a challenge then you may be in for a treat but for the rest of us the word puzzle implies some form of mental exercise. If I am required to touch the 3 owls or the four tree trunks onscreen then I would hardly regard this as a puzzle, much less award it the distinction of ‘clever’. Then there were the times when I was left tapping and sliding my finger to no avail, unsure of what to do, until I randomly succeeded, somehow more in the dark than I was before.

Not only does IGN ignore its faults, but it almost finds them quaint, as if they were part of the appeal. Next to complaints of “obtuse puzzles” that required random tapping on the screen to having to annoyingly rotate the iPad is a review score of 9.5. Somehow a few paragraphs of faults still results in an amazing game.

To be fair, the game’s creators refer to the app as more of an experience and an experiment but this leaves them stranded in a sort of visionary limbo. Unsure of what their focus is, they simply strap on the term experimental and all is forgiven. And when you consider that this small indie team didn’t really understand what they were doing their lack of experience becomes all too clear. The movement controls are not refined and sometimes completely unresponsive despite the necessity to run away from an enemy. Your goals are unclear at times and you find yourself trodding back and forth through the same areas hoping for a clue that doesn’t exist. You can survive a long boss fight with a lot of life left only to find that its final surprise attack is a one hit kill that forces you to redo the entire sequence again. Text in the game is often long-winded and irrelevant, and despite you having an in-game tome to record important information you can find yourselves in the same boring conversation again and again if you accidentally tap the same character again looking for new information. Ironically enough, even the tome of important information is mostly filled with dribble. And for a title so concerned with atmosphere and experience, you are often bombarded with “Tweet this” links when you see text tags in the game. I’m not sure why I would want to tweet a line of dialog but the constant marketing pushes are aggravating. 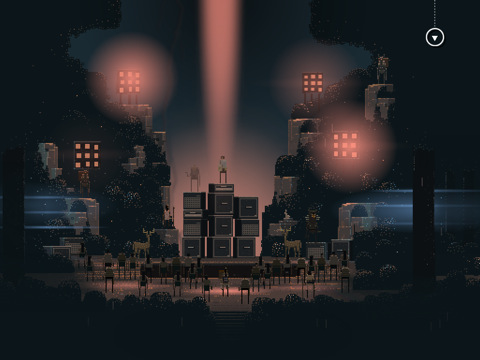 Now for the coup de grace. At one point in Sword & Sworcery you are tasked with collecting 3 pieces of an artifact. After the first one is acquired you may have a difficult time finding the other two. This is because one can only be unlocked during a real life full moon and the other during a new moon. For a game that only takes a few hours to beat, asking a player to wait two weeks is ludicrous, not to mention the hour or so that I walked around the level looking for something, anything to do. Hey, it’s cool that the moon in the game mirrors the moon in real life and if this was an MMO that people played for months and years then this type of thing may be acceptable but in this context I am left bewildered. If changing the date on my iPad didn’t work then I never would have completed this ‘experience’.

After all the negativity I do need to concede that Sword & Sworcery is a novel game and I’d recommend that people try it except the $5 price tag is a bit steep for the iPad indie game market. The music is great and the game doesn’t lack for style at least, but as a professional game developer this team made so many rookie mistakes that it turned my stomach.