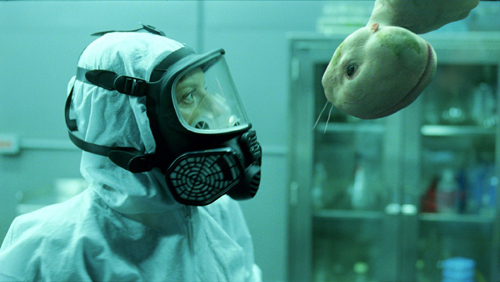 Here’s an under the radar movie from 2010 that I had heard some good things about but took a while to get to in my queue. Splice sounds more or less like typical horror movie fare when you look at the bulletpoints- mutant creature, immoral scientists, experiments gone wrong. However the direction the narrative moves in ends up taking unexpected, interesting, and uncomfortable turns.

The key element that sets Splice apart is the relationship the characters have with the ‘monster’. Without spoiling too much, instead of taking the easy route and having this nameless creature killing indiscriminately to show off gore, this story is a slower paced exploration into the ramifications of creating Frankenstein. Not to get too deep here- Splice has its fair share of uninspired moments and pseudo-science gibberish- but the psychology of treating an abomination as a pet and more does leave a lasting impression on the viewer.

Unfortunately, the last ten minutes of the movie carelessly forgets the subtlety that has been built up and takes a dump all over everything. If you haven’t seen this movie, I’d recommend you stop reading now and go watch it. The next paragraph spoils the ending.

Up until the end, the sequence of events was novel and unpredictable- I always had the feeling that I knew what was coming but I kept being surprised. Somehow the creature had been menacing without killing. Then the last ten minutes happened, where EVERYTHING I knew was going to happen happened, where the creature turned into a faceless monster that a hundred other movies did this year, where the internal conflict changed to an action oriented one, and even the yawn-inducing twist ending was obvious. In short, if the movie had simply ended with the creature dying, leaving the viewer to reflect on the experience, it would have been a much better overall experience.

It’s really too bad that Splice gave the audience what they expected at the end, because its strength until then was doing just the opposite.