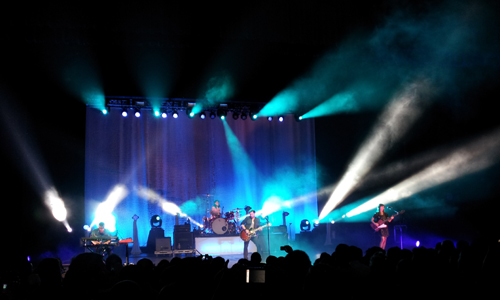 A few friends and I just caught the Silversun Pickups at the Santa Monica Civic Auditorium. Since I see a good deal of shows in the LA area, I figured I should start sorting them out.

Just off the 10 and easy to get to, the SMCA is in the heart of the city close to the beach. There’s ample parking in a next door pay garage and there’s no hassle getting inside. The interior structure looks like a 50s era bomb shelter- it is laid out like a theater but has little imagination or noticeable decoration. The plain cement walls and cement seating/steps are so bland that it would even be embarrassing for a high school pep rally. As with most shows, the AC didn’t do a very good job keeping the crowd cool on the General Admission floor but it was nice to be able to go outside in the front grounds for some fresh air. All in all the venue is pretty convenient.

The light show was top notch. I’m not sure how much of this had to do with Silversun’s set up but there were great visuals with modern lights. It was a simple layout too so I’m sure the limits could be pushed on this end. That said, it’s hard to judge the speaker system because the whole place is encased in cement and echoes like crazy. I have to say, especially considering the fairly large open space the crowd was standing in, the music was completely destroyed by the horrible acoustics. I love the band and am familiar with all their songs and it was sometimes hard to discern what was going on. I don’t know if everything could be blamed on just the echoes, either. At times the back up singer would chime in or a guitar solo would start and it took several seconds of silence before the volume was adjusted to the proper mix. Just awful for a great album that I wanted to enjoy live.

Now to the important part. Drinks were served outside and they had good bottles like Sailor Jerry’s available. Prices weren’t too bad and lines were plentiful and decently sized. We did generally wait about 5-7 minutes to order but it was pleasant standing and socializing in the front yard anyway. Pours were pretty good too. There was a food counter inside but it didn’t look appealing and no one was bothering.