Full disclosure: the amount of nerd hype surrounding this movie in the last couple of weeks has predisposed me to dislike it. However, if my review of The Avengers can be counted as like company, I’d say I can still be fairly objective in these situations. Just to play it safe, I went on a media blackout and didn’t watch any trailers or discuss the upcoming movie at all. I only tangentially heard that the whole thing was “kind of an Alien prequel” and entered the theater with zero expectations. So given all of this, how did Prometheus fare?

The answer is a resounding ‘awful’.

Prometheus is set in 2093, in the same universe as the Alien saga but with a disconnected crew on a separate spaceship. Their mission is to find the origin of human life but things obviously go wrong. The problem is, in a film with this kind of clout, absolutely everything was so unabashedly generic and predictable that I almost thought Ridley Scott was pulling a Cabin in the Woods and making fun of action/suspense movies.

See if any of this sounds familiar to you: a collection of the world’s most dysfunctional scientists get stuck in a bad situation and find themselves slowly killed off until only a scrappy girl survives. Although this big picture is a tired joke, I can commend the writers for attempting a more ambitious A-story. The problem is that all the little butterfly wings that set the plot points aflutter are laughable. One scientist leads the team into a desolate series of tunnels and sends out robotic mappers to scout ahead. Once they reach their destination he gets creeped out and wants to abandon the team and head back on his own. After another sorry sack joins him, they proceed to immediately get lost. Here is the guy who everybody else was following because he was literally mapping out the entire tunnel network and has a fucking nav device in his hand and we are supposed to believe that he gets lost? So then he and the other guy are foibling around, completely freaked at of the possibility of encountering anything slightly alive UNTIL they find a little critter and proceed to lose all traces of self preservation and repeatedly poke it. 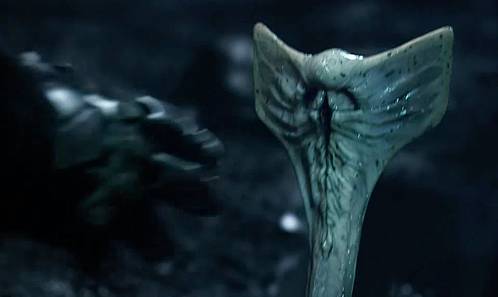 “Aww, check out this alien that looks like a pissed off cobra about to strike! It’s so cute!”

The ending even does Wile E. Coyote proud and features a sequence where the survivors are fleeing a spaceship wreckage by running in the same direction it is rolling towards them instead of simply sidestepping it. In case the audience isn’t infuriated enough, one of the characters actually trips and falls and *rolls sideways* out of the way while the other (more able) character continues to run along the path of destruction and dies.

The future technology in Prometheus isn’t very convincing either. It’s 2093 so many things are similar to today but of course there is all the spaceship technology. But when a couple scientists are getting mauled on the planet surface and no one is monitoring their activity, the captain of the ship wonders what happened to them and sends down a team to recover them. Let me see… the scientists were wired with cameras and radios and have been communicating successfully until they disappeared but what, there’s no way to check their recorded playback? I mean Jesus, the thought of not recording that shit today would be unheard of. Mixing modern technology with the plot tropes of yesteryear is lazy screenwriting.

Another futuristic failure? Prometheus has the worst guns you will ever see in a sci-fi movie EVER. The only time the gun resembling a pulse shotgun is used it is totally worthless. It looks like a toy gun that can’t even generate the recoil of a Nerf rifle.

Motivations are poorly handled in this film as well. First of all, the android-with-questionable-motives character from the other Alien movies returns but by the end of everything the reasons for some of his actions make absolutely no sense unless ‘doing crazy things to keep the audience guessing’ counts as a proper character arc these days. I will concede that at least the script attempts to maintain a mystery, but for every scarcely clever moment there are two others that can be seen a mile away. When it is obvious that one character is another’s daughter but for some reason the film pretends that you are too stupid to realize it, and then removes all subtlety out of a scene by inserting an excruciating reveal of “Father!”, I could take no more. 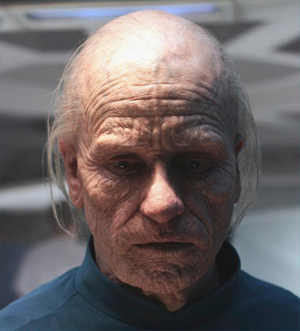 Also, why does old people makeup in movies still suck so bad? The aliens look more real than this guy.

So Prometheus is a crappy movie with forgettable characters acting out an overdone plot. What does it have? The obvious answer is, the alien. Not just any alien, but some strain of the classic Giger monster that is burned into our memory. But even here the movie fails us. The fan service is horrible – the original film was about science and explaining the biology and life cycle of the mysterious life form. This was a large part of the creature’s success and why it continues to be so iconic. Instead, Prometheus gives us an ‘anything goes’ mentality where the aliens have several forms that are very different from each other. Instead of a well thought out biology we are treated to an amalgamation of various shock tactics. The creators have specifically said that they didn’t want to do the same movie over again and wanted to break the cycle of showing what audiences expect. I can respect this, but then why make a movie that repeats all of the OTHER things that audiences have seen before, excluding the one thing that would have pleased us?

Prometheus is the classic case of a movie being worse because of its pedigree, though don’t think that means it would be considered good otherwise. But damn, at least the movie looks nice.