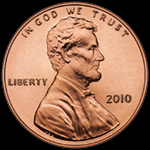 I have long told people that I don’t believe in pennies. Many might agree that, sure, these coins don’t serve a useful function in today’s world, but with me it is different. I literally do not believe in pennies. I liken it to a child finding out that Santa Claus and the Tooth Fairy don’t actually exist- of course something so ridiculous isn’t true. Of course a fat stranger doesn’t climb down my chimney and give me gifts. Of course there are no such creatures as teeth hoarding sprites. Of course millions of people don’t go around keeping clunky metal in their pockets, taking time out of their days to obsessively count over them and worry about fractions of transactions.

If you open your hands for change and get back a bunch of pennies you may as well have just been given a fistful of rocks. You can put them down, throw them on the floor, collect them in a pile – you can do all manner of things with them except spend them on anything. Ironically, the only reason to have any pennies on you at all is so you can make exact change to avoid getting more pennies. Why bother with the overhead of managing them when the return is so low?

This is a great question. And why doesn’t the government answer it despite the fact that pennies have cost more to create than they are worth for several years already? Sure, Sony sold PS3s at a loss for a few years but their end goals were to also sell a bunch of games and to wait until the technology was cheap enough that they could make a profit on the hardware. Instead of sound financial foresight, we are paying people to design a myriad of commemorative pennies and mint them, all for a net loss. Yes my friends, it looks like the penny is sticking around for a while longer, and I am sure you can imagine my views on change in general.

Any change I do get I just drop in a pile in my car. The only reason I dig through that is to get quarters (unless I pick up a fucking nickel by accident). The rest of it gets cleaned up once in a while into a jar in my house. What do I intend to do with that? Maybe one day I can cash it in and see years of dedication translated into twenty dollars. 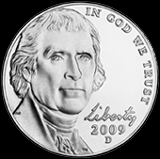 Nickels are annoying because they are so big almost to the point of tricking you into thinking they are quarters. It is not much of a surprise that these hefty coins have more worth in metal than in monetary currency. Nickels should be close to the chopping block as well but simply making them the little guy would be enough to appease me. I am thinking some sort of smaller sized penny-nickel hybrid.

It is hard to get mad about dimes. Besides being worth an imaginable fraction of a dollar they seem to realize their place in the currency hierarchy. They aren’t worth much and they know it and they are small and unassuming for it. I don’t generally use dimes but it isn’t beyond the realm of possibility, and aside from getting 5 at a time instead of a couple quarters I think they are generally a helpful unit of currency when dealing with change. 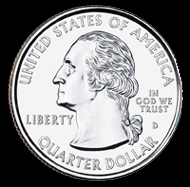 Even the mighty quarter has the hang up of still being change. It’s not that I care about their value as much as their practicality though. I need to do laundry every week and that is more than enough to justify their existence, but loads upon loads of machines across the country accept these as their only form of payment. Once these machines start taking bills or credit then I may form a different opinion, but there is still more fun to be had with quarters. You can play drinking games with them. You can flip them to determine the outcome of binary situations. You can play table basketball. You can pull them out of children’s ears. Really, have you ever tried to do any of these things with other coins? The results can be disastrous. 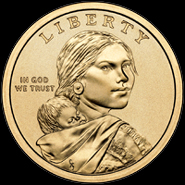 What a joke these are. It’s bad enough that the kids at Taco Bell think you are trying to screw them by slipping them Canadian currency, but who thought that Americans should have to lug around more change? Are we all just supposed to carry little sacks around everywhere we go? How many strippers need to be knocked out before we discontinue these abominations? And please don’t tell us that we are actually expected to start using 5 dollar bills to snort cocaine. The one dollar bill is a mainstay – don’t mess with a good thing. 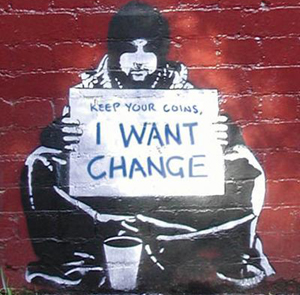 But back to pennies. In the store today I got change of $2.15. I put the two dollars in my wallet and was disappointed to see I got 5 pennies instead of a nickel. This is the worst way to receive pennies because you have 5 times as many coins that are 5 times as useless, and you didn’t even really want the nickel to begin with. I put the change on the counter and walk away and an old lady behind me kindly informs me that I forgot my fifteen cents. I told her I left it there for other people to use. Hopefully that change can save somebody else from getting pennies. Then I went to the grocery store and got $3.04 back in change. I put the dollars in my pocket as the 4 cents came out of one of those change machines. I was again warned that I was leaving pennies behind. This is a regular habit of mine and I was surprised that I got called on it twice in the same outing.

I wonder what these people think of me. Am I ignorant of the value of money? Am I an asshole for snubbing my nose at society’s conventions? I had long thought that others had come to share my disbelief of pennies. Maybe it is a childlike case of me closing my eyes and hoping they would go away but I prefer to think of everyone else as the children, finding magic in the simplest of things. And who am I to tell them that what they believe doesn’t exist? I’ll leave that for their mothers.