This UK show became a minor hit in the US when it debuted on Hulu. Misfits is about a small group of maladjusted young people brought together (and stuck in) community service. Oh yeah, and they all have super powers. This kind of great high concept paves the way for hilarious moments that never take themselves too seriously- the show often self referentially makes fun of itself. The short seasons are well thought out, tightly written, and endlessly amusing. Viewers are kept guessing simply because the events are too zany to predict. And that’s why this show is so great- it’s truly fun to watch and remains lighthearted but doesn’t use that as an excuse to cheap out on the plot. 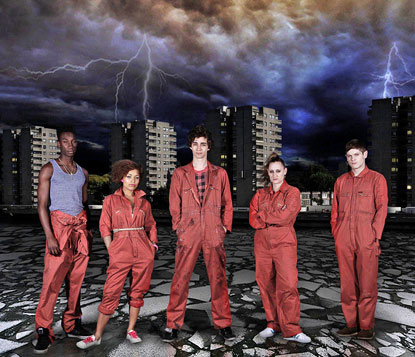 As good as the production of Misfits is, it wouldn’t be anywhere without the stellar performances of its young actors. Each character, with their own (not so) proper English dialect, has their own attitude and quirks. No matter what outside forces conspire to give the gang a bad day, the series is really about their interactions with each other. You see, they are usually not so nice, outright ribbing one another, giving you a sense that their attitudes to each other range anywhere from annoyed to calm distaste. But of course they all find ways to work together and overcome the week’s danger.

Another important factor contributing to the show’s mystique is the excellent music. Right from the title track to the plot sequences, this show is edited and cut to showcase a fast paced attitude. Modern background tracks add to the edginess and set the proper tone one should expect from a show about troubled youth.

The first Season of Misfits did a great job introducing the superpowers and explaining the inevitable fallout. Season 2 decided to have more fun with things and gets a little crazier although it does march towards a unified theme. Unfortunately, it looks like the short run of these 12 episodes will be the best of the bunch. In the classic UK format ‘Christmas Episode’ that followed, the show’s writer basically admitted that he ran out of ideas for the characters and led in to the next season being very different by changing everyone’s super power. And one of the show’s defining members has become a bit of a star and won’t be around for the third season. Even the writer of the series is giving up the reins to others. It seems like too many things are changing for Misfits to remain as impeccable as its been. A lot of the fun was that these heroes are coming to their probation duties every day, powerful but resigned to cleaning graffiti off city walls. Now that community service is over, it seems like the end of an era.

[For what it’s worth, Season 3 has started and isn’t bad from what I’ve seen so far, but I still think it’s fair to say that the series will never be the same.]