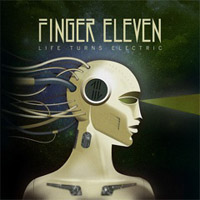 I’ve previously mentioned Finger Eleven’s disappointing slide from greatness. After two lights out records they would never return to form. Their 3rd album was a large departure – it can definitely be considered good but it remains disappointing because the formula was changed. The band had a lot of success with One Thing, similar to how Pearl Jam’s (later) most played radio songs were among their worst soft crap. This led to the complete lack of creativity in the band’s 4th album. While there were some good tunes and talent on display a lot of tracks, like Window Song, were just trying to cash in on poppy success and as a result the entire album suffered.

Now their latest album (not quite so new anymore), Life Turns Electric, while still full of pop hooks and their signature new style, doesn’t try too hard for fame. It is a much more solid outing but still a shadow of the band’s initial efforts. Whatever Doesn’t Kill Me and Stone Soul are similar attempts at topping the pop charts but there is more depth put into these songs that makes them more bearable. There is a bit of a rut mid album where a few of the songs get a bit campy but besides these tracks Finger Eleven put together a solid album. For the first time since 2003 the group is attempting to not devote all of their resources into packaging a single. Sure, a couple tracks like Living in a Dream do try to capitalize off the catchiness of their previous single, Paralyzer. This isn’t necessarily a bad thing but it falls short of true 5 star material.

But past all this there is markedly more substance to the album. Life Turns Electric is alive with interesting hooks even in the mid-tier songs. This is a collection of fun music that remains engaging and likable. The band has sworn to take more time to produce their tracks and the improvement does show. Still, in the interest of their legacy, I’d recommend taking an extra year for their next outing.