It is time for another year of the Electronic Entertainment Expo and what better way to start than having Microsoft, Nintendo, and Sony duke it out with their pre-E3 press conferences. For the uninformed, these are hour long hype machines hosted by the biggest corporate tools you have ever seen in your life. Today was Microsoft’s turn and as expected it was time for them to unveil their motion controller.

While the press conference did start out with glimpses of Gears of War and Halo, nothing was notably wow-worthy, perhaps with the exception of the Metal Gear game. A new Xbox Slim is pretty cool but the announcement of built-in wifi (welcome to 4 years ago) doesn’t deter me from noticing that there was no price drop. This is because the majority of the show was meant to focus on the “next era of entertainment” which is the “evolution of motion control”- the Microsoft Kinect. This is a camera system that plugs into your Xbox and tracks your skeletal movement to allow you to control games without a physical controller at all. 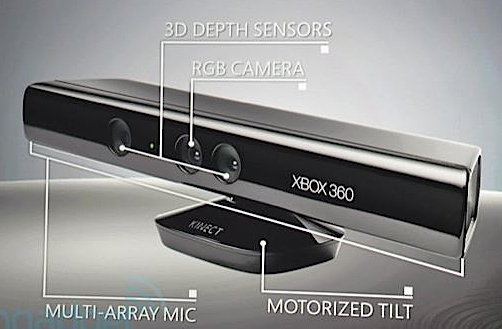 At face value this sounds cool. The thought of navigating menus with your hands a la Minority Report is tasty. The facial recognition and voice command input are logical followups. Saying, “Xbox Pause” to put a movie on hold is actually kinda cool. So how does the Kinect break down?

I have to admit that Microsoft is making a run at the casual market very strategically. There is a dance game that beats anything DDR can do. I don’t need to make a creative leap to imagine junior high kids learning classic dance move and performing on screen to a Guitar Hero like system. The pet sim for little kids, while very limited, may sucker enough parents into noticing the Kinect. There is a fitness program that doesn’t require a pad and can track any motions your body is doing and make sure you are correctly matching a personal trainer onscreen. I’m genuinely curious to see what this technology can inspire in a couple years.

There are a couple big problems with what Microsoft is selling. The first is that something is automatically easier and more natural to use without a controller, an obvious slam at Sony’s Move motion controller. But this isn’t necessarily true. Easier? Imagine if you walked into a building and wanted to turn on the light and there was no switch anywhere. No problem, just say the right voice command, or make the correct hand gesture, and presto, you’re done! Well, what is the correct thing to do here? The lack of a physical switch isn’t by nature more intuitive. What about more natural? Well, if I am playing a golf game I can hold my hands in front of me and pretend I am holding a club, or I can grip a physical controller with the same form I would use in real life. It is certainly more natural to actually feel a baseball bat, steering wheel, or guitar in your hands.

Another potential issue is the accuracy of the system. While there’s no denying that Sony’s physical controller will more accurately reflect movement, the question is whether or not people will care. If Microsoft is truly going after the casual market then this most likely is not an actual problem. But there were some games being shown that may be approaching the ‘hardcore’ spectrum. The racing game, for example, allowed you to pretend to hold a steering wheel but had no discernible method of controlling the gas. Games that require multiple controls, however simple, will suffer. And any games that require immediate reaction will just not play as well as their controller-driven counterparts.

A great thing about these press conferences is that, without fail, there is always a new internet meme born. Whether it’s Cliffy B acting like he’s on MTV 15 years ago (“What’s up bitches?”) or a preview of a game billed as having realistic historical battles right before a giant 3 story scorpion boss fight starts, there will always be something Tosh.0 worthy. This time this guy rolled out to present a few games. 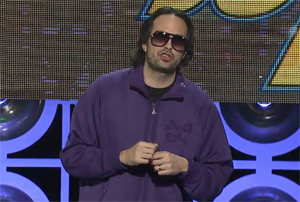 Now I don’t know who he is really or why he was wearing sunglasses inside during the day but it was a pretty weird scene. At one point he introduced some people who were gonna play a game and one of them said “Thank you Lorenzo Lamas.” It was a completely unscripted joke as the dude was walking off the stage and he turned around semi-laughing, semi in shock and said, “What the … fuck?” before his mic was cut off.

So it’s hard to say if the Microsoft Kinect will succeed or not. It mostly depends on if it captures the imagination of the populace. And that is the question, since they are shamelessly targeting the Nintendo Wii audience. Not only did they copy their avatars and then actually claim to invent the concept of avatars at last year’s press conference, but they are shoveling advanced versions of Wii Sports, Wii Fit, and Nintendogs. In no uncertain terms, Microsoft is trying to outwii the Wii. The question is, does this casual market really want to buy another console that they will use for a little while before stuffing into their closet? I’m not saying the answer is no because there will be hella marketing backing this thing for sure, but a large part of the Wii’s success was the low price point and that is not something that the Kinect bundle will likely have. I wouldn’t be surprised if Microsoft finds themselves going in another direction with this technology as it matures.