The familiar zombie apocalypse was dreamed up by Richard Matheson in a novel that everyone knows about because of the 3rd movie version starring Will Smith. I Am Legend is about a post apocalyptic modern world where bacteria has caused everyone to turn into vampires. Everyone, of course, except Robert Neville – the last man on Earth. 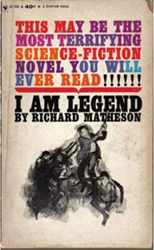 Reading through the book today you will encounter very common themes – hordes of undead, lone survivors, vampire myths explained- but what is most important is that when the book was written in 1954, none of these themes were widespread. This novel was a direct inspiration for Night of the Living Dead a few years later and is the father of the zombie apocalypse genre we are all familiar with. I Am Legend is one of the first real works to modernize vampires into what we think of them as today. At the time it was considered original to give scientific explanations to the supernatural affliction of vampirism and the idea of a bacteria wiping out humanity was fairly novel, but certainly the combination of them both was a fresh take on the end of days.

This is a good lasting legacy for the book because it received mixed reviews when it was first released. While short and easy to read, I’d say the first half of the book moves too slowly. The second half picks up the pace and the ending really ties the entire story into something worth remembering. While the author was a heavy Twilight Zone contributor, reading through I Am Legend somehow manages not to feel like the ‘Weird Science fiction’ of the years before, even though that was the audience Matheson was trying to appeal to at the time.

At 160 pages this novel is easy to get through. You won’t be blown away but given the significance of this book serving as inspiration for many stories today, it is well worth the time investment.

Download the ebook here (import this to your iPad to read in iBooks using email or otherwise).