Do I want to join your mafia? Well, is it fun? Did I just find a lonely sheep? What can I do with that? For the last couple of years the newest phenomena in the game industry are ‘social games’. For those that don’t keep up with all the cute game category names, this just means ‘games you can play on Facebook’ (because certainly many other games are social).

These games have long held my contempt for many reasons. Here at Why I Hate Everything, what I find particularly egregious is when something less than ordinary is hailed as holier than thou. Do you remember the big push for mobile gaming years ago when cell phones first started being built with semi-decent processors? There was actually a Ratchet & Clank game that you could play on your Motorola as long as you didn’t mind 5 frames a second and only being able to push one button at a time. Next we had the great iPhone game boom and the industry was turned upside down because a few people early to market made some money. I personally know several developers who have tried to capitalize on the empty promises of the faux market known as the App Store. And now everybody is making a Facebook game. It is the new fad, and why should its fate be any better?

Unfortunately, people tend to be reactionary because it tends to be more exciting. When I attended the latest Game Developers Conference I was sickened to see how much emphasis was put on Facebook games and their poster-company Zynga was making ridiculous proclamations from on high. The idea presented was that social games are forever changing the industry landscape, that free-to-play is king, and that AAA console gaming as we know it is dying. This is right after a banner year when Modern Warfare 2 was crowned as having the most profitable entertainment product launch of all time. Seriously, I know you guys entered the market early, Zynga, and I know you’ve had unheard of success, but why feel the need to jaw about being better than everybody else? Ride the wave while you can, guys.

I played Mafia Wars for literally 25 seconds when it first came out. I concluded that it wasn’t a game and it certainly wasn’t fun. Of course, that didn’t stop it and Farmville from making bucketloads of cash. To me, a game like this is really more of a short-term scam. Its profit is driven from psychological tricks with money the ultimate goal that informs the design. Just google Zynga business practices and you will read a lot of unflattering stuff. It is self-admittedly less about fun and more about profit. The problem is, these ‘games’ are pretty much spam. People have already started to grow wary of the viral tactic of using invites to get more users. Facebook allows blocking notifications from apps because the majority of users already realize that it’s not fun to wade through advertisements to see status updates of their friends. Millions of users per month are being shed as developers like Zynga are scrambling to find more legitimate ways to harass people into playing their products. 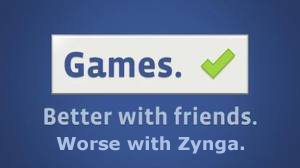 Don’t get me wrong – I am not bad mouthing all games that can be played on Facebook. There are plenty of casual audiences that appreciate what is out there but there are also plenty of companies that care about nothing other than ‘motivating’ these players to part with their money to account for bad, in fact under-handed, game design. And there will be a smile on my face when the mighty fall. Now, I am not naive enough to believe that these games will go away forever. To me it is similar to being a telemarketer- people can make a living doing anything if they have no self-respect and some people will always look to money as their primary motivating factor. Just another way to make a quick buck. But the writing is on the wall. Game companies like EA, Activision, and Ubisoft have all made announcements of entering the social network arena. As better social games get created people will be less susceptible to the tactics of old. For now and for the short term people will still be paying money for non-fun experiences without realizing that anything better is out there but eventually competition will drive up the product quality and the cheap knock-offs will be left in the dust.

It is why Zynga needs to start making better games. And it is why they are spending a lot of their cash buying small developers around the United States and the world. Because they do not know how to make good games. Because they’ve never yet tried.