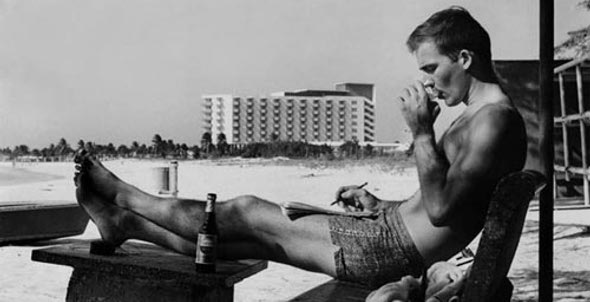 I read this book last summer and didn’t feel like it was notable enough to mention here. It’s not bad by any means; I was entertained reading it but I did feel like it fell short of being noteworthy. Of course everyone is well familiar with Hunter S. Thompson’s Fear and Loathing in Las Vegas. Johnny Depp is reprising his pseudo-role inspired by the depraved author in a film coming out next year. After reading The Road and regretting not talking about how excellent the book was before the movie was released, I decided not to repeat the experience and comment on The Rum Diary before it went mainstream.

First and foremost I should note that both Fear and Loathing in Las Vegas and The Rum Diary are fictional stories based on experiences in Hunter S. Thompson’s life. The Rum Diary is about a journalist that goes down to Puerto Rico in the 1950s to work for a B rated newspaper with unabashed alcoholism and not giving a fuck as the primary experiences offered. While mostly fictional I would believe that the collection of stories weren’t heavily embellished because the events fail to ever achieve the legendary status that Americans prefer in their tales. Indeed the story remains believable, moving from one exotic experience to the next, slowly building up tension while never truly delivering on what was hinted at.

For the academics looking for a concise narrative or critique of an unwelcome white-run newspaper in the developing state of Puerto Rico, the events fail to hit a satisfying climax and never attempt to teach a lesson gained from hard-gotten wisdom. For the partiers like myself who want a book laden with crazy examples of debauchery- well, aside from a pretty rough party I don’t think the depravity ever hits full steam. In fact, in my urban life it’s likely that I’ve been in comparable situations to anything in the book and I simply felt let down by the normality of it all.

That said, the novel is a fun read and it does romanticize a time and place that we are unaccustomed to today. Being a journalist working a fuck all job for a shitty newspaper in a third world country sounds like a fun romp. If the primary function of your job entails scamming free alcohol and being able to bail you out of jail then it’s safe to say that some interesting things do happen. At the same time I can pretty much guarantee that the movie will be ripe with embellishment to satisfy a modern audience. There’s a reason this novel wasn’t published for decades until 1999, after the box office success of Fear and Loathing. Still, it’s hard to think of Johnny Depp letting us down.