I just watched this quality documentary about the hunting of dolphins in a Japanese town. The original Flipper trainer became an anti-dolphinarium activist and is trying his best to make sure dolphins have the same international protections as whales and don’t get hunted. A team of environmentalists gets high tech in a real life special ops mission that proves to be interesting viewing. 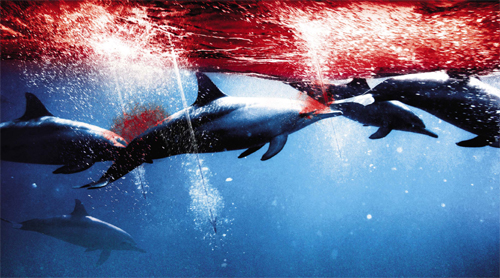 The Cove doesn’t use a lot of the cheap documentary tricks that usually make me hate the form of film. They don’t play horrible music and show people in unflattering slow motion clips if they want you to dislike them. Sure, it is a documentary, and sure, they are trying to push their beliefs on you. While they don’t go out of their way to show the Japanese side of the story I think they do a good job of not being overly unfair like most documentaries. And there does appear to some shadiness with the town of Taiji.

Sure, dolphins are cool and all and I don’t believe they should be killed but it is really hard to be too judgmental over what another country chooses for food. Yes, a lot of dolphins are dying and yes, there is a lot of blood in the water. I am sure there is a lot of blood at cow and pig slaughterhouses as well. If you look around the world you will find a lot that disgusts the average Westerner. Cats and dogs are eaten in China. Monkey brains are a delicacy in Indonesia and China. Horses are eaten in parts of Europe. And China. Actually, in case you didn’t know, Chinese people eat pretty much anything. So when it comes to whale and dolphin hunting it’s just really hard to hate on the Japanese unless you are a vegetarian and believe that no animals should be eaten at all.

All said and done, The Cove is a well made film with good pacing and direction. At only 90 minutes it is very easy to watch and you will no doubt learn at least a few interesting things from it. Check it out.