Should the toilet seat be left up or down? Men want it up to act as a urinal. Women use it down and would prefer to leave it that way. Who’s right? 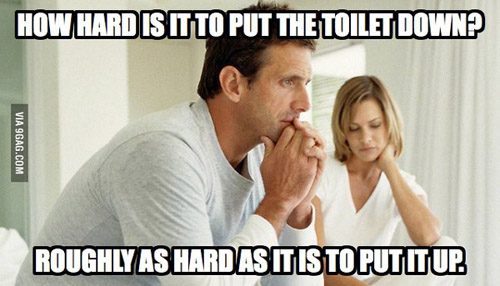 The old adage is that the woman wants the seat down so she doesn’t accidentally ‘fall in,’ whatever that means. First of all, if anybody, ever, ‘falls in’ the toilet bowl, they are an idiot. I would like to hear a well articulated argument where this isn’t true. There is simply no defense for a grown-ass-human to accidentally sit in a dirty bowl of crap-water.

Secondly, some women and men have looked to statistics. I can’t tell you how many arguments I’ve seen about the toilet seat that were based on optimizing time. But let’s stop analyzing the percentages that men and women need to sit versus stand. Sure, statistical analysis is interesting, but keep in mind that all of this work is to decide who should save half a second. (That’s another way of saying that this isn’t the kind of problem that needs statistical analysis.) All of these studies are failing to grasp the big picture. The only factor they are considering is the time is takes to do the deed. Now, laziness might be a good enough reason to do something if it were the only reason, but it’s not. 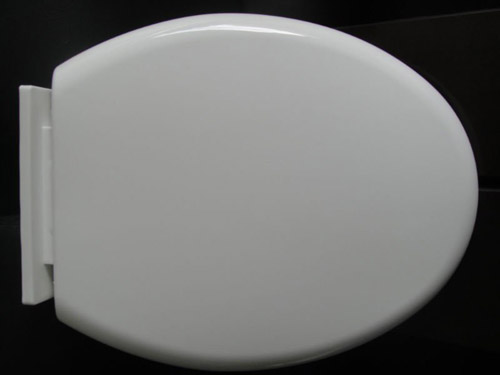 There are, it turns out, several good reasons why the common wisdom of both men and women is wrong. Not only should the seat be down, but so should the cover. Always. Here are 4 reasons why:

1) The Toilet Bowl is Unsightly

U.S. law dictates that everyone have a low flush toilet. Scientifically, this means it "uses less water to force crap down the drain." This set-up often causes all types of unsightly skid-marks to line the porcelain path on the way down. Why expose guests and others to that view, especially if they’re not even using the toilet?

2) The Toilet Bowl is Dirty

This goes hand in hand with #1, but I’m listing it separately because it’s a health concern. Thousands of microscopic feces organisms fly into the air and all around the bathroom when you flush with the cover open. Scientists regularly find objects like toothbrushes coated with this. Now, as disgusting as this is to think about, the fact of the matter is that these germs aren’t so bad. We can handle a bit of it. But see if you’d rather flush with the cover open after pondering this.

3) The Cover Protects Those that Don’t Know Better

Hey, I know what a toilet is. I don’t stick my hand in the water under any circumstances, even if it’s on fire. But I had a dog growing up that would regularly drink out of the bowl. This is horrible. Pets are one thing, little kids are another. Why not prevent access to something that we think is disgusting when it’s not in use?

4) The Cover Protects Us from Ourselves

You might thank me the next time you put your cell phone down and it bounces off the counter and off the toilet cover instead of into the bowl. A $400 phone will always be a toilet phone once that happens, even if it’s waterproof.