My girlfriend says she likes Mexicans because they’re funny. I’m not sure if that’s racist but I know one thing that isn’t funny – Mexican chorizo. It’s a pale imitation of the proper Spanish styled sausage and is more of a soft sausage mush with chorizo flavoring than the actual thing.

For a little background, chorizo is a sausage originating in Spain made from good cuts of chopped pork and pork fat. It is usually seasoned with salt, paprika, garlic, and some herbs and often has a smoky flavor. You can find small thin links of sausage or larger versions depending on the usage, but since it is cured it is usually sliced and eaten at room temperature- perfect for tapas with bread and cheese. When I was in Spain you could find chorizo in all manner of grocery stores and cafes. Growing up in Miami, I am accustomed to the many Cuban dishes that use the small sausage for its strong seasoning. I can make a mean picadillo using chorizo as the secret ingredient. 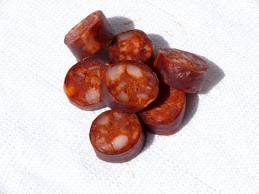 So when I moved to Los Angeles I was delighted to see all the food trucks selling chorizo tacos or huevos con chorizo or papas. I had no idea that Mexican culture had embraced the sausage to such an extent but I was sorely disappointed when I tasted the local flavor. Mexican chorizo is heavily sauced and minced into unrecognizable portions then mixed in with other foods. This didn’t taste anything like what I was used to and for the last few years I would eat chorizo sparingly, blindly hoping that I would stumble upon something halfway authentic.

The answer came recently when I wanted to pick up some chorizo for a garbage plate party. Garbage plates are… well, maybe they warrant a separate post, this time on the positive side of the spectrum. But back to the point, standing in a Mexican grocery store because the Cuban market I took for granted had closed, I was surrounded by packages of large uncooked sausages labeled ‘chorizo’. I was bewildered at what I was looking at. I realize that you can probably buy authentic chorizo uncooked instead of cured but it was more than that. These sausages were phony. They started with the worst cuts of pork and tendons, which of course required the meat to be finely ground, had the salt and garlic but usually skipped the paprika, and tossed in some food coloring to compensate. Mexican chorizo is commonly made from cheaper ingredients and runs about a quarter of the price of even American made spanish styled sausages. 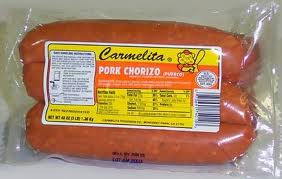 So now I need to begin the task of finding out where I can buy good chorizo again. I am seriously considering having it shipped from Spain. Maybe I can get my brother to bring a bunch with him when he moves from there back to the states. And next time I am at a taco truck considering between my options of carne asada, carnitas, al pastor, and chorizo, I will know better. And Mexicans should too.