Where can I begin? How about with, “Why this movie?” There are plenty of other superhero movies that I can pick on and most of them are far worse. But Iron Man had potential. The spot-on casting of Robert Downey Jr. as Tony Stark and the opening scene with a nice sense of comedy and believability layed all the foundation for a great movie. Unfortunately, the perfect storm of horrible writing sunk Iron Man to the depths of a Fantastic-Four-grade superhero flick. 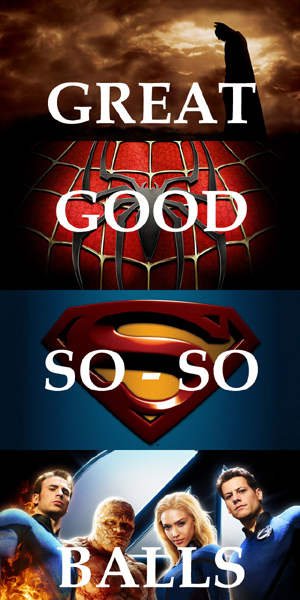 It’s a hard fact to swallow that good writing isn’t associated with making money in the movie industry. Slowly, surely, I have come to accept this. Iron Man’s opening weekend blew away that of Batman Begins. And I’m ok with not requiring every story to be so calculated and congruent. I try hard not to be a writing snob. But I will demand that a plot be a bit more thought out than that of the average GI Joe cartoon.

I can litter you with examples of ridiculous or contrived scenes. Tony Stark’s numerous near death experiences testing his suit out ‘to the max.’ His building a micro energy heart and having robot helpers but calling Pepper Potts down to the basement to plug it in for him because she has “little hands.” Sure, these scenes suck, but they are harmless Hollywood drivel meant for cheap laughs or romance to keep the girlfriend from making fun of your not-so-charming-anymore infatuation with comic book characters. This kind of suck I can tolerate.

But the plot sequencing in Iron Man is so utterly tragic that it’s a wonder why viewers don’t walk out of this movie offended. Here’s a spoiler: Pepper Potts finds out who the real bad guy is and that he orchestrated an assassination attempt on Tony Stark’s life. She hurriedly walks out of the bad man’s office. The next scene shows Tony lounging on his sofa casually as he gets a call from Pepper, undoubtedly to warn him of his would-be killer. But oops! Just as he goes to pick up the phone, the bad guy pops up behind him and gets him!

Now, I may be a complete moron, but how did this situation come about exactly? Did Pepper rush out of the bad guy’s office but make a stop at Starbucks for a venti latte before deciding to, you know, CALL HER BOSS TONY STARK AND TELL HIM THAT HE IS IN DANGER? What was going on in the two hours between these scenes? I tried to make a timeline of the movie but it just made my head hurt. Apparently it only takes a few days to build a state-of-the-art robotic suit. 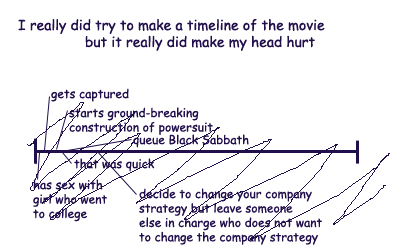 Speaking of flying body armor, if the best enemy we could come up with is ANOTHER guy in flying body armor then we may as well all just give up. It just smacks of Knight Rider complex. Hey, Michael Knight was a bad dude and we all loved Kitt, but how many 80’s bad guys did we need to see build their own super cars before it jumped the shark?

Here you have these two robotic suits trying to squish each other but they are impenetrable. I’m not going to get mad that all Hollywood movies require masked characters take off their masks to remind the dumbasses watching who they’re looking at. Targeting computers not working is only a bit more contrived than Peter Parker’s Spiderman mask ripping perfectly halfway after all. But I let out an audible chuckle when bad Iron Man crushed good Iron Man’s helmet effortlessly in his hands after Tony Stark removed it. If it was that easy to crush the titanium-whatever Iron Man suit then why didn’t you do that BEFORE WHEN YOU WERE GRABBING HIM? And targeting computer or no, if you have a mini-rpg and your target is 10 feet away, you need to actually try to miss him that far off and that many times.

But I digress. With such a good start, about the only thing the movie did consistently was get more and more ridiculous until I absolutely hated it at the end.