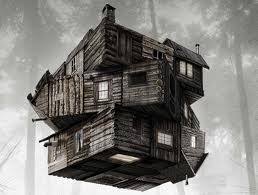 5 stereotypical college students get in a trailer and drive out to the remote outskirts of town to stay in a cabin in the woods for a long weekend, but what starts out as simple fun is more than it seems and the group realizes their lives are in danger. Hmm, so what is it about this tired premise that garners a 92% on Rotten Tomatoes? Well, based on the not-so-spoiler in the trailer and the beginning of the movie, there is even more to this situation than there appears to be. You see, some underground organization is pulling all the strings and watching the horror unfold on a series of hidden cameras.

Essentially what Cabin in the Woods boils down to is a horror comedy that makes fun of horror movies. The problem is, this kind of self-referential humor has already been well overdone at this point. Sure there are a couple of moments that made me chuckle when the group decides that ‘splitting up to cover more ground’ would be a better idea than sticking together but numerous playful zombie movies and Scream sequels have well explained the horror movie laws to us by now: the slutty chick is the first one to die; the alpha male that everybody thinks is best equipped to save everyone isn’t the hero. Trying to make a new movie based on this premise alone will surely fall flat.

Luckily there is more going on here. While the overall plot and eventual conclusion are somewhat predictable, the final act feels very satisfying for audiences familiar with American horror. The carnage and dark comedy slant feel meta enough to be clever and an audience seeking fun should find plenty. All of this makes the first act all the more puzzling. I understand the idea is to convey that this is a classic horror movie and to play out the familiar tropes at the start before digging deeper, but the first act was slow and tedious to watch. I think the acting was alright but the dialog, a usual strength of Joss Whedon’s, felt forced and pointless. The fact that the opening scene of Cabin in the Woods shows there is more going on and continually interjects scenes of the group being watched and controlled makes me feel like the first third of the movie was a missed opportunity.

Where the movie excels, however, are the specific jabs it makes at pop culture. There is a nod to Hellraiser by including a demon with a metal puzzle toy- his name in the credits? Fornicus, Lord of Bondage and Pain. There are a couple references to Japanese horror cinema and if you are not laughing out loud at the last one then you have no sense of humor. But Cabin in the Woods is not just one of those low budget comedies that makes fun of all the currently successful flicks in a specific genre (aka Scary Movie) so it needs to find humor in more original spaces as well.

So should you watch this movie? Yes, if you like fun movies or the horror genre. Is it the movie of the year so far or does it totally blow away the old concept of scary movies? Not really. It’s kind of more of the same. It just makes fun of itself more than average.